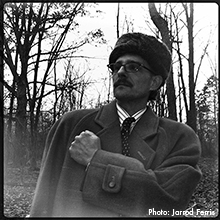 Gustave Morin is a fixture of the concrete poetry scene and the creator of Clean Sails, The Etcetera Barbecue, A Penny Dreadful, numerous chapbooks, and, as co–editor, The Windsor Salt. His work has also appeared in over 100 publications and over a dozen anthologies.

Gustave makes his happy home at The Grove Stand — located on the outer edge of the Sun Parlour of Canada — in the frontier metropolis known as Windsor/Detroit. There he is deeply involved with Common Ground, an art gallery; Media City, a film festival; Imprimerie Espontaneo, a publishing enterprise; and 23 Skidoo!, an independent film ensemble.

In addition to his many dark arts, he holds a fireworks operator certificate and is a member in good standing of both CUPE 543 and of I.A.T.S.E. local 580. Oi! to the savant garde!