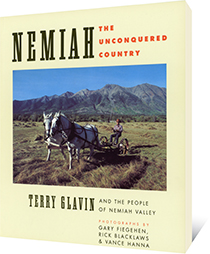 Those words were true in 1864, when the Tsilhqot'in Nation were among the very few First Nations peoples to win a war against European settlers (the Chilcotin War). They were true in 1990, when Terry Glavin spent a month living in the Nemiah Valley to learn about the Xeni Gwet'in people's successful campaign to prevent logging in their homeland. And they're still true in 2014: since the 1992 publication of Nemiah: The Unconquered Country, the Xeni Gwet'in people of BC's Chilcotin region have won a series of court battles that culminated in a landmark June 2014 Supreme Court ruling expanding First Nations' land claims; they have successfully opposed, for a third time, Taseko Mines' "New Prosperity" project; and they're among the many signatories to the Save the Fraser Declaration, a First Nations law that forbids Enbridge's Northern Gateway project from despoiling their lands.

Nemiah: The Unconquered Country has long been out of print. But a recent warehouse move unearthed a few long–lost cartons of this collaboration between the Xeni Gwet'in people, Terry Glavin, and photographers Gary Fiegehen, Rick Blacklaws, and Vance Hanna. New Star Books is pleased to offer this book once more, for a limited time.

Since long before Canada existed, the Nemiah Valley has been home to grizzly bears, moose, the wild horses of the Brittany triangle, and the Xeni Gwet'in people of the Tsilhqot'in Nation. Nemiah: The Unconquered Country is the story of the Chilcotin War and of a people determined to resist interference from governments and corporations. It is a rich and moving portrayal of and by the Xeni Gwet'in people, told through a vivid tapestry of their own stories, a text by renowned author and journalist Terry Glavin, and "superb photos and design" (Quill & Quire starred review, 1993) that unite to "convey a strong sense of the injustice of the colonial encounter, whether in its nineteenth–century or twentieth–century form" (BCLA Reporter, 1993).

That injustice continues into the twenty–first century — 150 years since the Chilcotin War and over 20 years since its publication, Nemiah: The Unconquered Country resonates more than ever. The Xeni Gwet'in have still "never got beat,"but with the recent approval of the Northern Gateway project, Tsilhqot'in territory is again threatened by industry. Now is the perfect time to revisit this "rich, lively story that is both an intellectual and emotional argument for the sanctuary they seek in the land they belong to" (Canadian Geographic, 1993), and "allows us to see the dissonance created when one culture's geography is laid over another's" (Books in Canada, 1993).

Terry Glavin is a columnist for the Ottawa Citizen and author of many books, several of which have been finalists for the Governor–General's Award and the BC Book Prizes. The Last Great Sea (2003) won the Hubert Evans Non–Fiction Prize, and Glavin won the BC Lieutenant–Governor's Award for Literary Excellence in 2009. His books include A Death Feast in Dimlahamid (1990), A Ghost In the Water (1994), This Ragged Place (1996), The Last Great Sea (2000), Waiting For the Macaws (2006), and Sturgeon Reach (2012).