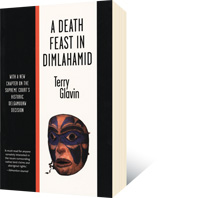 A Death Feast in Dimlahamid

About A Death Feast in Dimlahamid

On December 11, 1997, the Supreme Court of Canada rendered its decision in the historical aboriginal title action known a Delgamuukw versus The Queen. The decision vindicated the fifty–two Gitkan and We’suwe’en chiefs named as the plaintiffs in the court case, and completely rewrites the rules for resolving Native title in Canada.

Epic battles with bear spirits in the streets of an ancient mythical city, logging–road showdowns deep in the Skeena Mountains, and forays into courtrooms and boardrooms in Vancouver punctuate Glavin’s eminently readable account of this land claims case.

This new edition reprints the complete text of the original 1990 edition, and adds a new chapter that takes up the narrative from the point when the case was still before the BC Supreme Court, follows the tumultuous events from Oka to the establishment of the BC Treaty Commission, examines the landscape that lies behind the incoherence and hysteria surrounding aboriginal rights in British Columbia, and looks ahead to a post–Delgamuukw Canada.

Terry Glavin is the author of Governor-General's Award finalist This Ragged Place, Nemiah: The Unconquered Country, A Ghost in the Water, and Dead Reckoning: Confronting the Crisis in Pacific Fisheries. A Death Feast in Dimlahamid was a finalist for the Hubert Evans Prize for Best BC Non-Fiction Book of 1990.