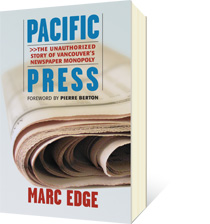 Purchase online or from a bookstore:
Find an independent bookstore ·
Amazon · Indigo

As a city of 2 million, Vancouver is not unusual in having two daily newspapers. What makes it an anomaly among North American cities is that the Vancouver Sun and the Province share an owner, the former Pacific Press. In this in–depth account, researcher Marc Edge traces the history of Pacific Press from its inception in 1957 to the Sun’s shift to morning publications in 1991.

Pacific Press analyzes the market, business, and labour forces that gave rise to and shaped Pacific Press. We also get intimate glimpses of the early Vancouver newspaper world, including insight into Robert Cromie, publisher of the Sun, and heirs Don, Bob and Sam. Tales of venerable editorialist Bruce Hutchison, red–baiting Province columnist Ormond Turner, warring Sun writers Allan Fotheringham and Doug Collins and many others enliven the narrative. Pacific Press furnishes an invaluable history of newspapering in Vancouver that is also a gripping business saga.

A native of Greater Vancouver, Marc Edge began his newspaper career as a writer at the Province in 1974. He later worked in the business section of the Calgary Herald, and in 1982 completed a Master of Labor and Industrial Relations degree at Michigan State University. He was BC Supreme Court reporter for the Province for ten years before accepting a Southam buyout offer in 1993. From 1995 to 1997, he sailed his forty-foot ketch Markenurh around the Pacific. He completed a PhD in Mass Communication from the E.W. Scripps School of Journalism at Ohio University in 2001, and is Assistant Professor in the School of Communication Studies at Nanyang Technological University in Singapore. He can be contacted by e-mail at pacificpress@hotmail.com.