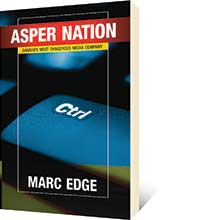 The second generation of Aspers that now runs Canada's largest news media company is much like the first. Israel "Izzy" Asper's three children often appear in today's headlines. David is bidding to buy the Winnipeg Blue Bombers football team. Gail heads fundraising efforts for the new Canadian Museum of Human Rights. Leonard sits in his father's place as head of CanWest Global Communications. Like its founder, they also use their media empire to influence public opinion. Asper Nation explains why Canadians should be concerned about where the country's first family of news media is coming from, politically.

Izzy Asper was an oddity as a Liberal politician in the 1970s. Fiscally, he was to the right of most Conservatives. As a nationally syndicated newspaper columnist, he called for a flat tax and "workfare." As a best–selling author, he helped thwart a plan to shift Canada's tax burden from the middle class onto corporations. But when Asper took his policies to Manitobans as Liberal leader in 1973, he was soundly defeated. Asper got into the television business instead and built Canada's third network.

Asper made CanWest the country's most profitable broadcaster by feasting on regulations that encouraged the importation of cheap American programming. He took his formula to the world in the 1990s, buying television networks in New Zealand, Australia, and Ireland. Then in 2000, Asper pioneered media "convergence," buying Canada's largest newspaper chain from Conrad Black. Southam dailies were soon ordered to run "national" editorials written at CanWest Global headquarters in Winnipeg.

This corporate news control brought protest from journalists and two government inquiries. Neither resulted in long–sought limits on media ownership, however. Marc Edge offers a compelling account of the political perils involved in allowing the Asper family to dominate Canadian media.

After a 20–year career as a journalist in Western Canada, Marc Edge has taught journalism and communication in Canada, the United States and Singapore. He is currently an Associate Professor in the Department of Mass Communication at Sam Houston State University in Huntsville, Texas. He is the author of Pacific Press: The Unauthorized History of Vancouver's Newspaper Monopoly and Red Line, Blue Line, Bottom Line: How Push came to Shove Between the NHL and Its Players. He has a website, www.marcedge.com