Books → Non-Fiction → What Species of Creatures 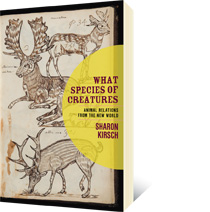 What Species of Creatures: Animal Relations from the New World

About What Species of Creatures

The Europeans who colonized North America more than three centuries ago encountered fantastical creatures: flying squirrels, ruby–throated hummingbirds, the easily tamed beaver. Their literature of discovery – by turns comic, cruel, and adulatory – provides a revealing glimpse of the taxonomies they carried with them into their so–called New World.

Sharon Kirsch weaves early settler accounts, fables, children's stories, natural histories and 21st century science in a quirky narrative that probes our complicated relationship with the other creatures that share the planet.

Illustrated with twenty period drawings, and peppered with verbatim accounts by these early settlers, What Species of Creatures is a rich and satisfying stew of odd historical facts and figures.

"Fascinating . . . Kirsch skillfully stitches together this scattered survey of European testimony and observations about encounters with New World animals with very challenging but rich prose . . . With so few books in early Canadian history on the subject of human-animal relations, however, Kirsch's work is a very welcome contribution that should open the door for other scholars and writers to pursue this kind of research."
— Sean Kheraj, H-Net / Humanities and Social Sciences On-Line

"[O]ffers unexpected surprises in each chapter on almost every page . . . This book is like no other I know, an imaginative assemblage of intriguing material on human and animal lives, woven together seamlessly to create mysterious tales. Sharon Kirsch has produced a unique, scholarly, and engaging chronicle of the early encounters between Europeans and the New World animals."
— Lynette Hart, Anthrozoos

Sharon Kirsch lives in Toronto. She is a freelance writer and editor.