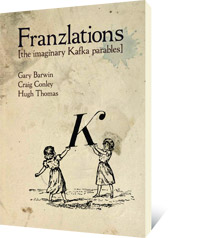 Franzlations takes the parables and aphorisms of Kafka as a starting point, and steps a few places to the left in order to reinvent them. Sometimes this means walking off a cliff and into the empty air. (Don't look down!) Sometimes this means keeping the cage and replacing the bird. For of course, Kafka's writing is a rich source of ideas, play, structure, and wit. It looks like the real world, but in the way the bootstrap that one pulls oneself up with looks like a real bootstrap.

It is said that if Kafka had not existed, Kafka would have had to invent him. But since he did exist, Franzlations has invented an imaginary Kafka so that he could help create the Kafka that was already there. Perhaps it was that. Kafka who helped create these imaginary parables.

This, itself, is a parable.

A man once said, "If you only followed the parables, you yourselves would become parables and with that rid yourself of all your daily cares." Another replied, "I bet that is also a parable." The first said: "You have won." The second said: "But unfortunately only in parable." The first said: "No, in reality: in parable you have lost." ––– Franz Kafka

Gary Barwin is a writer, composer, and performer. His publications include six poetry collections (including the recent The Porcupinity of the Stars) and two fiction collections, and a collaborative novel. He was the co–winner of the 2010 bpNichol Chapbook Award, the 2011 Harbourfront Battle of the Bands, and the 1998 K.M. Hunter Foundation Artist Award. His work has been commissioned and broadcast by the CBC.

Hugh Thomas teaches mathematics at the University of New Brunswick. A chapbook of his poetry, Heart badly buried by five shovels, was recently published by paper kite press.