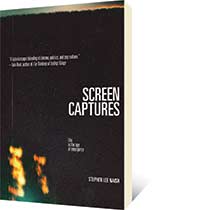 Screen Captures: Film in the Age of Emergency

A spirited, far-sighted guide to politics, Star Wars, the Avengers, David Lynch, and the lost highways between them, for today's capitalist-realist age.

“We've met before, haven't we?” The grand illusion of our era is that we're at the end of history and cinema is now no more than tranquilizing entertainment. What we've lost sight of is the political undercurrent running through movies and their potentially redemptive power, whether they're Hollywood mega blockbusters like Star Wars or off-kilter indies and art films like Blue Velvet.

This is the premise and the challenge of the wide-ranging essays that make up Screen Captures, in which Dennis Hopper, Nicholas Cage, Valerie Solanas, and even Donald Trump all have a starring role. The book tells, as much as it shows, what lies just out of frame: the impacts of COVID on theatres, the class war of the 1% upon the rest, the climate crisis, the ongoing Disney-fication of franchises, and the audience's active participation in the rewriting and reproduction of their capture by screens. Throughout, subliminally, Stephen Lee Naish rings his urgent call: occupy the screen!

“Original, sharp, and thought-provoking, Screen Captures: Film in the Age of Emergency is a kaleidoscopic blending of cinema, politics, and pop-culture.”
—Iain Reid, author of I'm Thinking of Endings Things and Foe

“Stephen Lee Naish is a perceptive social critic and a genuine movie enthusiast. This book marries both in fruitful tension. Fresh readings of familiar films abound. His examination of the powerful influence of fan culture is illuminating. The business dynamics of this rapidly evolving industry are well researched and articulated. Screen Captures is an elegantly written call to see popular cinema as a rich window into the complex, precarious and confusing world we all share.”
—Clarke Mackey, filmmaker and author of Random Acts of Culture: Reclaiming Art and Community in the 21st Century

“Following Stephen Lee Naish through his journey with film is fun and enlightening. Naish is right. Film ‘says a great deal about who we are, where we come from, and what we can strive to be.’”
—David Kyle Johnson, author of the Great Course's Sci-Phi: Science Fiction as Philosophy

He is the author of several books on film, politics, music, and pop culture.

He lives in Kingston, Ontario.