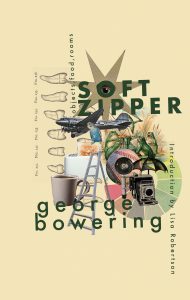 “The supple scale of space, from dresser drawer to American road trip, here folds and regroups the poet’s craft — for George’s prose is poet’s prose, with its joyous attention to the detail of syntax, the humour and mystery of juxtaposition, and the music of tone.”
– Lisa Robertson, from the Introduction.

Feast your eyes on the cover of George Bowering’s latest book, Soft Zipper. With an introduction from Lisa Robertson, Soft Zipper is set to hit the shelves in late March.

Borrowing a structure and some precepts about writing from Stein, Bowering remains true to his inimitable self, relating his recollections and observations, his ever-curious mind travelling across the decades as he recounts some of the objects, food, rooms, and people that have shaped his engagement with the world. Charles Olson’s ideas about proprioception shape Bowering’s approach to himself as “an object among objects” (and, with increasing age and frailty, even containing numerous objects), while Roland Barthes’s writing strategies also make themselves
felt throughout.

But these stories wear their learning lightly — it’s ridiculously easy to enjoy these wise and gentle reminiscences of an older writer who spent his childhood in sunny South Okanagan, without even noticing the carefully wrought structure.

Read the an excerpt of Soft Zipper below.

So an object is a thing, if tangible, placed before the eye, or if not tangible, before the mind. Let’s say more or less solid items one can see and theoretically touch. Our planet’s moon is a large object that few have touched, and that with the intermediary of space-age clothing. But now I have a junior grade philosophical question. Quite some time ago I had the lenses of my eyes cut away and replaced by artificial lenses. Leaving aside the qualities of objects seen through these lenses, can’t we say that the artificial lenses were objects before they were attached to my eyeballs, and isn’t there a problem in saying that they are now part of my subjective conglomerate? Of course you might interpose that every atom that makes up a human body came from our planet, and perhaps ultimately from stardust. Let’s leave eyes for now, and consider teeth. The eyes might be part of the brain while teeth are the visible part of the skeleton. I have a question similar to the one above, as there is a row of artificial teeth screwed into my left lower jawbone and another in my right upper jawbone. Are these still objects? I mean, I don’t consider my fingers and toes to be objects. Fifteen years ago a doctor in Welland inserted four short metal rods to hold my right hipbone together, and when I broke my right femur last spring, a Vancouver doctor took out those four short metal rods (I asked him whether I could have them for souvenirs, and he replied that the paperwork would be too much) and inserted a long metal rod in with the marrow, and some more connective pieces. I think that the airport metal detector would consider these rods to be objects, though they are not easily removable as are my hearing aids. But I can’t use the airport metal detector because I have a defibrillator inserted under the skin of my breast, and it has wires whose ends are inserted into my heart. It also has a pacemaker to help it with the mathematics. I am probably not worth six million dollars in scrap, but I face the twenty-four dollar question: is it easier for me than for most people to follow Charles Olson’s direction and sense myself as an object among objects?