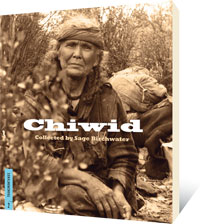 Chiwid was a Tsilhqot’in woman, said to have shamanistic powers, who spent most of her adult life "living out" in the hills and forests around Williams Lake, BC.

Chiwid is the story of this remarkable woman told in the vibrant voices of Chilcotin oldtimers, both native and non–native.

Chiwid is number 2 in the Transmontanus series.

Sage Birchwater has been a resident of the Cariboo Chilcotin Central Coast region since 1973. Originally from Victoria, he has led a varied life as a back–to–the–lander, trapper, ranch hand, educator, cultural researcher, community activist, newspaper reporter and freelance journalist. He has written, co–authored, or edited thirteen books. His most recent book, Chilcotin Chronicles (Caitlin Press 2017) was one of BC's top selling books of 2017.