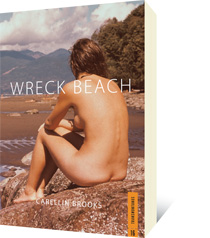 Ever wonder how Wreck Beach got its name? Or if it's always been a nude beach? What about the nudity ––– Is it against the law? Maybe you just want to know how to get to the best spots.

Look no further: here's the book with everything you've always wanted to know about Wreck Beach, the best nude beach in the world.

On any given day throughout the year, regardless of conditions, you're bound to find a spectrum of characters frolicking on the beach or in the water or alternately, huddling in that perfect sheltered spot. If sunshine and golden sands aren't enough to lure you down, maybe the amalgam of vendors will. Wreck Beach boasts an enviable array of munchies which may include Chinese BBQ pork buns, pizza, samosas with chutney, marijuana, and magic mushrooms. Entertainment includes Frisbee, skimboarding, impromptu jam sessions and the notorious male–only game of Beerball.

Naturally pristine, yet indelibly ruled by the characters who sun, sell, and sign petitions there, Wreck Beach is a beachlover's paradise. The main beach at the bottom of Trail 6 is where the landscape is most beacher–friendly: sand as far as the eye can see, and ocean to boot. The enthusiastic work of the Wreck Beach Preservation Society has allowed it to continue to be so. The Society's committment to keeping it untarnished is reflected in its resistance to outside regulation, while at the same time emphasizing self–policing.

The first comprehensive physical and political guide and a pioneer part of Wreck Beach history,

Wreck Beach is your perfect guide to its splendour whether you're a local history buff, or just like swimming in the buff.

Wreck Beach is number 16 in the Transmontanus series.

Carellin Brooks' earliest memory of Wreck Beach, as an inquisitive and adventurous 18–year–old, is mostly of the four hundred odd steps that lead down to, and later back up from, the beach.

Upon returning from England where she completed a Master of Studies degree in English, she rediscovered what it was that had intrigued her about the beach in the first place: the unbridled idealism nestled within its natural beauty. Wreck Beach is one of Vancouver's least commercialized beaches, where concession stands, manmade swimimng pools and toilets with plumbing are nothing more than myths.

The first time Brooks shed her clothes and swam in the nude, she recalls, was a "mystical experience. The day was perfect, sunny, glowing. It was heaven." Although Brooks is a great supporter of the work done by the Wreck Beach Preservation Society, her love affair with the beach is one that's highly personal.