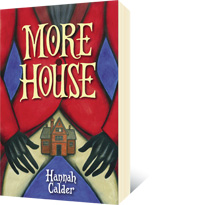 "From the opening 'cast list' that includes such characters as 'Grandad' played by 'My mother's father', to a narrator who admits, 'Actually, this is not even a story,' because, as s/he/it later declares, 'There is always more than one possible life,' this book keeps you guessing, laughing and dropping your jaw at the weird insights and awesomely daring prose. Go read it. Or watch it. Or listen to it. Or whatever it wants you to do with it, just do it."
— Rebecca Brown, author of The Gifts of the Body and The Terrible Girls

"For a generation of skeptic believers, a new sort of novel, the novel equivocal about its status as a novel. Like Lawrence Braithwaite's More at 7:30, Hannah Calder's More House displays its "more–ness" right in its title, and lives up to that promise in sequence after sequence of cinematic sweep and ambition. We used to say, everything but the kitchen sink, but Calder gives us the kitchen sinks of two centuries. In the main story of Joey — discontent in death as in life — and his mother — bent forever to her job, like the mother in Intolerance — Calder's prose simmers with hallucinatory heat. She is the most generous and attentive of writers, and one whose experiments crackle and blaze like wildfire, sweeping the landscape of her dreams like panopticon pinlights."
— Dodie Bellamy, author of Academonia and The Letters of Mina Harker

Two movies share a cast, a crew, and a set. More House, where Granny lives, and straight out of Victorian literature, is the scene of a Gothic period piece. In the other movie, The Lord wields his sceptre over another cast of characters including the cook, the butler, the groom, and the maids. Meanwhile, the Girl and her son, Joey, move uneasily between the overlapping, and sometimes fusing, scenarios.

Hannah Calder was born in England, and grew up there and in British Columbia. She currently lives in Vernon, BC. More House is her first book.