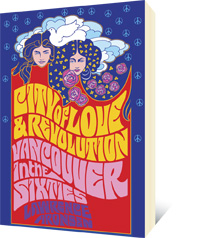 City of Love and Revolution: Vancouver in the Sixties

About City of Love and Revolution

City of Love and Revolution takes readers back to Vancouver in the sixties, the decade when everything changed for the Baby Boomer generation. Dozens of rarely seen photos accompany Lawrence Aronsen's account of the tumultuous decade, bringing to life the sights, the sounds, and the passions of the era of psychedelia and free love, when for a brief moment in time everything seemed possible.

Aronsen tells the story of the spread of the "hippie" lifestyle north from San Francisco into Vancouver, and how this rocked the buttoned–down, Protestant, whitebread frontier town that Vancouver had been until then. A chapter on the impact of the sexual revolution tells of love–ins, free clinics, public nudism, and the Penthouse and other Vancouver fleshpots. Other chapters recount the stories of the drugs and music that were embraced by the new generation of Vancouverites; of peaceful anti–war protesters and the birth of Greenpeace, and the harder edge of the Yippies and their occupations and street theatre; and of Vancouver Free University and the new ideas that forever changed the way our schools work.

Aronsen's readable account is illustrated with over 100 photos, drawings, and advertisements drawn from the newspapers — both straight and Georgia Straight — that chronicled the era.

Long–time Vancouverite Lawrence Aronsen, an active participant in the scene he describes, is professor of history at the University of Alberta and an authority on the Cold War. He is the author of three scholary works: The Origins of the Cold War in Comparative Perspective, The North Atlantic Triangle in a Changing World: Anglo–American–Canadian Relations, and American National Security and Economic Relations with Canada.