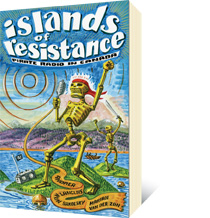 About Islands of Resistance

Visit the Islands of Resistance website for more about the book and to hear audio clips of pirate radio.

Since radio's invention, some Canadians have been concerned about the increasingly commercialized and centralized nature of medium. Sometimes working alone, more often in teams, and always illegally, these activists represent islands of resistance within the ocean of homogenous frequencies, pirating radio signals for personal, political and artistic expression.

In the first book published on the subject, Islands of Resistance gives you a view from the crowsnest of the phenomenon of pirate radio in Canada. Here is a collection of seventeen activist manifestos, artistic treatises of intent, historical essays on the development of radio and its regulatory bodies, sociological examination of pirate radio's application in new social movements, and personal anecdotes from behind the eyepatch.

Just as the new media ostenibly renders the old obsolete, Islands of Resistance unveils the existance of a thriving clandestine counterculture. An invaluable addition to an unscrutinized subject in Canadian media studies, Islands of Resistance appeals to the anarchist, anti–authoritarian impulses in all of us.

CHAPTER 14: Repurposed and Reassembled: Waking Up the Radio
Kristen Roos

Andrea Langlois was a member of the Indymedia movement (CMAQ.net). Autonomous Media: Activating Resistance and Dissent, co–edited with Frederic Dubois, documents uses of media by social justice movements in Canada. She lives in Victoria.

Ron Sakolsky has been a radio pirate for over twenty years in both the States and Canada, and with Stephen Dunifer co–edited Seizing the Airwaves: A Free Radio Handbook. He lives on Denman Island, BC.