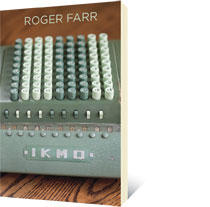 Roger Farr's IKMQ consists of sixty–four brief passages ––– stories, descriptions, instructions, scenarios, formulae ––– each involving the characters represented by the letters I, K, M and Q. Various clues, suggested by the rules of grammar and syntax, hint at connections and continuities, and at narrative peaking out from behind the screen of action.

But never mind the theory ––– enjoy the ride, as I, K, M and Q convert houses to commercial grow–ops, manufacture explosives, go all in on the flop, get up early to catch chinook, plan, build and sell subdivisions, conduct meetings according to Roberts, plot a prison break, score an all–important goal, get the door for the pizza delivery boy, and get on with transforming the world through their revolutionary action.

IKMQ was a finalist for the Dorothy Livesay Poetry Prize.

Described as "a poet of great heart and aesthetic / political commitment", Roger Farr is the author SURPLUS (poetry; Line Books, 2006), and MEANS (poetry, radio script, prose; Line Books, 2012). As a cultural critic, his writing on radical social movements and the avant–garde has appeared in numerous literary and "movement" periodicals, and has been broadcast on the airwaves of several pirate radio stations on the West Coast of North America. He teaches in the Creative Writing and Culture and Technology Programs at Capilano University, Vancouver BC, and edits CUE Books.