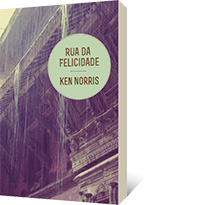 Rua Da Felicidade is an actual place, a "Street of Happiness" in colonial Macau, where from the 1920s to the 1950s it was said that every desire could be fulfilled — for a price.

It is a book written against the appropriative gesture, against the grain of what we too often believe we can possess for a price. Instead, the book turns on the seams of its signatures, where the spine connects everything that came before to everything yet to come, where "When you reach the middle / it is actually closer to the end." It is a book in which we lose ourselves in language, where the poet "writes / a poem so intimate / he dissolves / into the ink and paper."

Rua Da Felicidade celebrates both memory and desire precisely in their immateriality and impermanence. It does not seek to attach itself to an identity rooted in time and space, in history, but to constantly immerse itself in the uncertain materiality of the here and now. As such, it challenges Williams's dictum "no ideas but in things": "You'll sail the world / in your paper boat, / eventually throwing out / your cordless anchor."

This simultaneous immersion in and elision of the materials that constitute every present moment of the text is what allows us, in the poem "Changes" for example, to witness the opening of a day in one city and watch it move to closure in another, halfway around the world, without losing a single particular of that day's constructed progression — without ever having a sense either of moving, or of being out of place. This is a book of poems where the signifier's desire for the signified is expressed as the hunger of language to possess its object, and "will never tire of wanting / what cannot be possessed."

Ken Norris was born in New York City in 1951. He emigrated to Canada in the early seventies and soon joined the infamous Vehicule Poets, who were essential in helping to develop and maintain a particular style of Anglo poetry in Montreal. He became a Canadian citizen in 1985.

Norris is the author of more than two dozen books and chapbooks of poetry, and is the editor of eight anthologies of poetry and poetics. His work has been widely anthologized in Canada and throughout the English–speaking world, as well as published in translation in France, Belgium, Israel and China. Norris has been Writer–in–Residence at McGill University and the Visiting Professor of Canadian Studies at Western Washington University. For the past twenty–eight years he has taught Canadian literature and creative writing at the University of Maine. He currently divides his time between Canada, the United States and Asia.