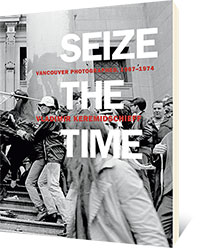 About Seize the Time

A photo portrait of Vancouver's extended "summer of love," Vladimir Keremidschieff's Seize the Time captures an era of profound change in Lotusland.

Vlad's infatuation with photography began in 1967 when a friend introduced him to the craft and then left town, taking his 35mm Pentax camera with him — Vlad just had to get one of his own. His blossoming love of the darkroom matched his fascination with the adolescent city blooming into life before his eyes. For the next seven years, Vlad recorded the captivating wonders unfolding in front of his lens. Seize the Time presents 100 images originally shot for the Georgia Straight, the Vancouver Sun, The Province, and Vlad's own pleasure.

These photographs document Vancouver at a moment of profound change, when the buttoned-down, rainswept city of developer Tom "Terrific" Campbell was being washed away by the social and cultural wave of the Sixties. Vlad was on hand to record the cityscape, the business suits and severe coifs, and the hippie phenomenon that pushed all of that to the side. The music was a massive part of this, and Seize the Time includes a fantastic selection of rock musicians who played in Vancouver, Seattle, and nearby music festivals: Cream, Blind Faith, Phil Ochs, Janis Joplin, Jim Morrison, Dylan and The Band, and many more. The music festivals, the protests, the squats on the North Shore mudflats, and the passion of that moment in time are indelibly captured by his photographs.

When Vlad left Vancouver in 1974 he put his negatives in storage, where they remained for almost forty years. In 2011 he began selecting and scanning the best of his images from that magical moment, preserved now in Seize the Time.

Vladimir Keremidschieff was born in Germany in 1947. His family emigrated to Australia shortly after, and then to Vancouver in 1957. He spent seven years as a freelance photographer, with his work appearing in The Province, the Vancouver Sun, the Georgia Straight, and numerous other publications. Keremidschieff and his wife left Vancouver to sail the South Pacific in 1974 and ended up living in Perth, Australia. Today Keremidschieff lives in Sydney, Australia, where he teaches English as a second language.