Books → Fiction → Dance Moves of the Near Future 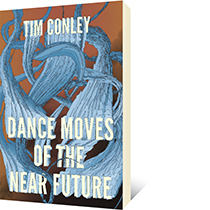 Dance Moves of the Near Future

About Dance Moves of the Near Future

"A wild ride through the absurd, the surreal and the speculative... Part storytelling prowess, part hitting the sweet spot between realism and the weird (and the weird is almost always played straight), part dedication to the aesthetic as overriding function... You could get into what any individual story means — and sometimes the meaning is an existential joke — but the overall effect of these 24 experiments isn't an idea but a feeling: an unsettling, a strangely pleasant unease."
—Jade Colbert, Globe and Mail

Tim Conley's prose whipsaws between carefully observed realism and fantastic absurdity to create surreal, compact worlds. Whether they're sketching the familial fallout of a stentorian patriarch or teaching the eponymous dance moves to survivors of the apocalypse ("With the rise of the invertebrates, spinelessness has never been so hip"), these stories are all marked by precise, engaging prose, dark humour, and a demented imagination.

The 24 stories in Dance Moves of the Near Future open with a sentient cactus and close with a crash of rhinos. In between you'll find a high-strung parrot, untenured yahoos, an amorphous, mind-controlling blob, optometrists in a strip club, a dash of Old Testament shenanigans, and weighty ontological concerns. These stories are unpredictable — even volatile — but they all share a wicked sense of humour, and a piercing eye for human (and inhuman) fallibility.

"Dance Moves of the Near Future is a collection of the strange and wonderful. Someplace between Bender and Barthelme is Conley: exhibiting humour, imagination, and total command."
—Emily Schultz, author of The Blondes.

Shortlisted for The ReLit Awards, 2016

Tim Conley is the author of several books of fiction, poetry, and criticism, including Dance Moves of the Near Future (New Star Books, 2015) and Unless Acted Upon (Mansfield Press, 2019). He teaches modernist and contemporary literature at Brock University in St. Catharines, Ontario.