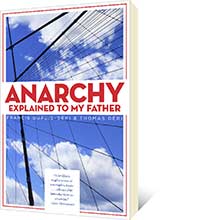 Anarchy Explained to My Father

About Anarchy Explained to My Father

Anarchy Explained to My Father (first published by Lux Éditeur in 2014 as L'anarchie expliquée à mon père) is a provocative and accessible discussion of the revolutionary mode of thought that rejects all forms of domination and seeks, in the words of Louise Michel, "order through harmony." Francis Dupuis–Déri, a professor of political science and a radical anarchist, reveals through dialogue with his father the deeply humanistic and peaceful roots of anarchism. The discussion shows that beyond the caricature of anarchists as proponents of chaos and violence is a movement based on ideals of equality, co-operation, and autonomy.

The wide-ranging conversation covers the ideas of classic writers such as Proudhon, Bakunin, and Goldman, as well as contemporary thinkers like Taiaiake Alfred, Patricia Hill Collins, and Randall Amster; the main flavours of anarchism, from anarcho-syndicalism to anarcha-feminism; anarchist views on oppressive systems like the state, capitalism, and patriarchy; the tremendous achievements that anarchist activists have contributed to, such as labour unions and eight-hour work days; and the recent resurgence of anarchism in protest movements and activist groups around the world. With temperatures rising and authoritarianism flourishing near and far, Anarchy Explained to My Father is a timely initiation to a way of thinking that's more relevant than ever.

"Anarchy Explained to My Father is the best introduction to anarchism since Alexander Berkman's 1929 classic Now and After: The ABC of Communist Anarchism.

In a thoughtful and engaging question-and-answer format, the authors explore anarchism from its historical roots to the present. They gently correct popular misconceptions to outline anarchism's positive contribution to political theory and practice, as well as the dilemmas it engages, from the use of violent tactics to the irony of teaching anarchism in the university.

This book should be read by anyone who wonders what anarchism is, what it can be, and how we work towards it."
— Mark Leier, author of Bakunin: The Creative Passion and Rebel Life.

Translated from the French by John Gilmore.

Francis Dupuis–Déri teaches political science at Université du Québec à Montréal and is the author of numerous books and articles about anarchism, including Who's Afraid of the Black Blocs? Anarchy in Action Around the World (Between the Lines, 2013). His father, Thomas Déri, is a former publisher, an editor and translator, co-founder of the Librairie du Québec bookstore in Paris, and former director of the Salon du livre book fair in Montreal.