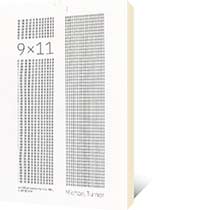 ‘A small room behind a bay window. A single bed, a table and chair,and a sink. I could manage something larger, with more conveniences,but I could never match the view.’

How you view 21st century life depends largely on the view from your place, which depends on where you can afford to live. In this suite of texts and poems written over twenty years that span the infamous towers, Michael Turner drops in to see what condition he's in, a subject whipped into insistence by the rhythms that shape his city, his neighbourhood, his universe.

What arises out of the debris of these towers is a vision of contemporary history that sees them — their creation and destruction — existing within a web of capital relations that leave no landlord or office worker unturned.

In her Globe and Mail review of Turner's “startlingly straightforward and minimalist” 8x10 (2009), Zoe Whitall concludes: “8x10 is an unsettling and daring work, a tangible symbol of our anxious world and the stark emotional devastation of war. I hope Turner starts a trend in Canadian literature, because Canada needs more writers like him.”

"Reading Michael Turner's extraordinary 9x11 I was reminded of Christa Wolf's Accident, how global crisis intensifies the daily — except that in Turner's/our current state disruption has become the new norm. Disruption both terrifies and excites the poet — the stacked monotony of skyscrapers is broken both by the horror of people leaping out of buildings and by Mallarme's thrilling abandonment of vertical structure in "Un coup de des jamais n'abolira le hasard" (1897). All the reflections and contemplative rhymes add up to a holographic text that begs repeated reading. "9 x 11" is a date, a disaster, and the measurements of the poet's room. For Turner architecture is a form of poetic divination, and poetry is a form of architecture. Living in a city, community is inevitable — coffee house / apartment building / poetry peers — and despite his caution, Turner's tense heart proves very big."
— Dodie Bellamy

Michael Turner was born in North Vancouver, B.C. in 1962 and spent his teenage summers working in the Skeena River salmon fishery. After high school, he travelled through Europe and North Africa, eventually to the University of Victoria, where he completed a BA (anthropology) in 1986. Between 1987-1993 he sang and played banjo in Hard Rock Miners; upon his retirement from touring, he opened the Malcolm Lowry Room (1993-1997). His first book, Company Town (1991), was nominated for a Dorothy Livesay Poetry Prize. His second book, Hard Core Logo, was adapted to feature-film. Kingsway (1995), American Whiskey Bar (1997), The Pornographer's Poem (1999) and 8x10 (2009) followed. A frequent collaborator, he has written scripts with Stan Douglas, poems with Geoffrey Farmer and songs with cub, Dream Warriors, Fishbone and Kinnie Starr. He blogs at this address mtwebsit@blogspot.com.