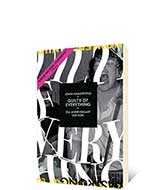 It's 1978 and a non–stop carnival of debauchery begins as the first shock of punk hits Vancouver. Now, in 2022, revisit John Armstrong's pivotal memoir in the 20th anniversary edition of Guilty of Everything.

As Buck Cherry – lead singer and guitarist of The Modernettes – Armstrong had himself a front row seat to the frenzy of the 70s and 80s alongside the likes of I Braineater, Joey Shithead, Dimwit, Chuck Biscuits, Mary Jo Kopechne, Art Bergmann and other figures of Vancouver's earliest punk days. From White Rock to Vancouver, the back rooms and alleys of the Smilin' Buddha to the Commodore Ballroom, Guilty of Everything recounts the drug–addled, booze–soaked days and nights of this anarchic era, brought to life once again by Armstrong's candid and compelling prose.

'Armstrong is a natural storyteller and vividly places the reader at a variety of seminal scenes...an entertaining and essential historical document of Canadian punk.'
— Michael Barclay, exclaim.ca

'Quite possibly my favourite punk memoir/historical account...He told the story of some of the formative years of the Vancouver punk scene as he experienced it and created a thoroughly entertaining tale of a bygone era in the process.'
— Chris Eng, author of Molotov Hearts

My Paddle's Keen and Bright

Parents began sending their kids off to summer camp more than a century ago, a tradition that continues strong in the face of transformative changes to society, and childhood. The history of summer camping, with its roots in Boy Scouts and other Victorian–era social movements, is beginning to be written. But until Summer Camp, less has been said about the experiences of the generations of young men and women whose outlook has been shaped by their summer vacations.

In My Paddle's Keen and Bright, Rika Ruebsaat allows the camp veterans of all ages and backgrounds to reflect on their experiences, and the indelible lifelong impressions these have left on them.

Every facet of camp experience is described, from the bus or boat that takes you away from the familiars into a new world of strangers, to the bittersweet partings and memories lasting a lifetime. Campers describe the terror, and exhilaration, of learning about new people and different lives outside of their own families; the food, strange rituals, and exciting new adventures involving boats, or horses, or hikes, chores, even practical jokes. Here are the vivid recollections of passionate friendships made in the course of a few days; of crushes on counsellors; the campfires and songs; the first fumbling sexual explorations; the skinned knees and overcome fears; the lessons learned and carried for the rest of their lives.

Grown–ups from all social classes and outloooks established summer camps. The storytellers reflect on their experiences in the more traditional summer camps organized by Boy Scouts or Girl Guides; the camps organized by religious organizations or around political viewpoints. The differences – and, more often, the continuities – provide a fascinating and unique perspective into a world that continues to leave an indelible mark on society, even as the world of summer camp slips into history.

Naked Defiance is the story of a turn–of–the–century radical art group and its charismatic leader, written by one of its members, Florian Moore (probably a pseudonym), and which lands on the desk of novelist / editor Patrik Sampler, tasked with preparing Moore's manuscript for publication.

Unfolding as a report on an investigation into the death of the group's leader Ganbold Mirzoyan while in police custody, Naked Defiance is a mystery about a series of public performances staged by the eponymous group, and the increasingly disturbing disruptions that its own interventions become subjected to.

Even as their readers move on–line and their advertisers look elsewhere, daily newspapers continue to be our main source of information, shaping citizens' understanding of the world, and their reactions to events. At the same time, continuing a long–term trend in media ownership, newsrooms have been gutted as new owners prioritize double–digit profit margins. Dwindling reporting staff is able to do less and less actual reporting, as they become more and more reliant on official releases and carefully tailored public relations handouts.

In The Postmedia Effect, Marc Edge takes Canada's dominant newspaper chain, Postmedia, as a case study laying bare the changes in news economics that over the past two generations have hollowed out the nation's newsrooms, undermining not just citizens' trust in what is reported to them, but the very foundations of a democracy steered by an informed electorate.

The Sky and the Patio

In 22 engaging essays, Summerland writer Don Gayton fuses the personal with the ecological to portray the geography and the natural and human history of his adopted Okanagan Valley homeland.

Draft resister and professional ecologist by training, Don Gayton registers the complexity and interconnectedness of every living thing in his environment, from the rivers and lakes, to the plants and animals, and the human settlements along the Okanagan, Similkameen, and Columbia watercourses shaping his backyard.

The Sky and the Patio describes the patterns made by iconic native species such as ponderosa pine, sagebruch and bunchgrass, the sockeye salmon and turtles, and the non–natives reshaping their world: the toadflax and knapweed, antelopebrush, horses and cattle – and the grapevines, tomatoes and cannabis looking for a foothold today.

Gayton tells us what we can learn from tree rings besides the tree's age; some fine points about firewood; and a little bit about Chinook wawa, and his own library of nature writing.