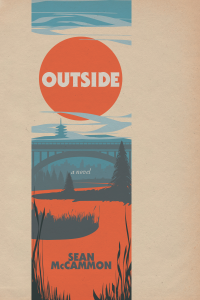 Tense and emotionally gripping, Outside is the story of a teacher’s escape to Japan from classroom, country, and self in the wake of a small-town Ontario tragedy.

New Star Books is excited to reveal the cover for Outside, the upcoming debut novel from Sean McCammon, as well as a preview of the first two chapters of the book.

David Woods arrives in Japan with a suitcase full of pharmaceuticals and nightmares that leave him drenched in sweat. A tragic incident has led him to leave his family, his teaching job and his girlfriend, Joanna. With his once-charmed life in shambles, David seeks anonymity in a Kyoto guest house, but instead finds friendship with an eclectic group of world travellers.

As a teacher, David fought to take his students into the woods, convinced that they would learn more on the trails than within the confines of the classroom. In Japan, he turns to nature again, hiking the mountains of Kyoto, visiting Buddhist temples and Shinto shrines, trying to make sense of an incident born of randomness.

Outside is an ode to the responsibility of the teacher, the healing power of friendship, and the search for meaning in a haphazard world.

Read the first two chapters of Outside below.

The pharmaceutical evidence of David’s anguish was spread out on the table. The Japanese customs officer examined the pill bottles one at time. David wasn’t sure if the woman spoke English, so when she picked up his sleeping pills, he said, “For sleep,” and feigned sleeping. When she scrutinized his migraine medication, he said, “That’s for headaches,” and rubbed his temples.
The woman now turned to look at David. The expression on her face made David think she was waiting for an answer to a question. He looked at her helplessly, wondering if his poorly planned escape from Canada would end in this white room.
It was then that David realized the woman was wiggling a package of laxatives between her thumb and forefinger. Apparently she was looking forward to his next exercise in charades.
The suggestion of humour allowed David to relax, and the officer began repacking his suitcase more neatly than she had found it.
As she zipped up the bag, she asked, “Why have you come to Japan?”
The tone of her voice suggested that this was not an official question. It sounded like she was making friendly conversation, and David considered confessing everything to her.
Finally he said, “I just had to get away from home for a while.”
“Of course.” The woman smiled. “Like all the rest.”

David’s journey to Tokyo had been precipitated by a series of events that began with a pact made in a rowboat almost two years earlier.
The night of David’s graduation from teachers’ college, he and his girlfriend, Joanna, had walked down to a dock behind the Windermere Manor Hotel.
“We’re graduates,” said Joanna, jumping into an aluminum fishing boat beside the dock.
“Feels good,” said David.
“Feels scary.”
Joanna lay back in the boat, the fabric of her dress sticking to the dew on the wood. She said, “I hear they’re looking for vets up north.”
“North? Like the Arctic?”
“No. Sudbury. North Bay.”
David sat on the dock and unclipped the rope that moored the boat.
“Would you go to North Bay?” Joanna asked.
“Would you go if I didn’t?”
“We have to start somewhere. Unless your plan is to set me adrift.”
“I’d go to North Bay,” said David.
“We need money,” said Joanna. “Wherever one of us gets a job, that’s where we’ll go.” She sat up. “Deal?”
David jumped into the boat, and Joanna grabbed his suit-jacket to keep him from falling over the side. They floated around, looking at stars. Music from the party drifted in and out with the breeze.
“Well?” said Joanna. “Is it a deal?”
“I guess so,” said David. “We’re in the same boat.”

David took the train from Narita Airport into Tokyo. He had reservations for two nights at a ryokan, a small family-run inn near the Ikebukuro district. David had been expecting a hotel, but his friend Mitchell had made the arrangements for him.
The ryokan was in a quiet residential area, nestled among neatly manicured cedar trees. David’s room was large and bright, and featured a traditional tatami-mat floor and rice-paper doors. Most travellers would have found the ryokan to be a peaceful oasis, but David was unnerved by family members entering his room unexpectedly to serve tea or leave towels. He could not figure out how to change the channel on the television and spent much of the first night watching a sumo wrestling tournament.
Breakfast was a communal affair, served around a long table, with guests seated on the floor. David was forced to wedge his legs awkwardly under the table. During one repositioning he lifted the entire table, causing the other travellers to lunge for their sloshing cups and bowls.
The shower stall in David’s bathroom had a wooden stool in it, with a nozzle halfway up the wall. David’s interpretation of the set-up was that he was expected to sit on the stool while washing. But there was no way he could sit on the tiny seat, so he ended up lying on his back with his feet up on the wall. He held the stool upside down on his belly, the warm water running over it: a lost astronaut in a leaky porcelain rocket.

Only one month into his job search, David had landed a teaching position at an elementary school in Dumford Mills, forty minutes south of Ottawa. The offer to teach at Emily Carr Public School was a total fluke, a happy turn of events that David attributed to his rural upbringing. At his interview, he and the principal had talked as much about farm practices as teaching practices.
That summer, David and Joanna found a farmhouse for rent outside Dumford Mills. It was old and drafty but possessed enough rural charm to make them feel at home. The farmland around the house was rented out to a neighbouring farmer who planted corn. The owners of the farm had retired to Ottawa, and they encouraged David and Joanna to spruce things up wherever they were inspired.
During their first few weeks of country living, Joanna went on a baking spree, making muffins and pies for the neighbours, hoping to ease any suspicions about the strangers from southwestern Ontario. David sprayed insulating foam into the cracks of the house, his coveralls and mask making him look like a mad exterminator.
One night Joanna was on the phone, complaining to her mother about mice and raccoons and leaky sheds.
“Oh dear, Joanna,” her mother said. “Are you happy out there?”
“Mom, you have to visit. The house needs a lot of work, and I complain, but there are so many stars and an old well, and a dinner bell. A dinner bell! Mom, really, it’s perfect.”