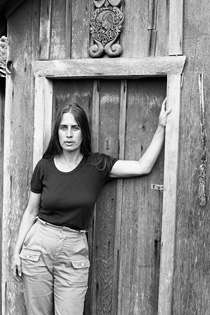 Born in the UK, Maxine Gadd moved to Canada's west coast with her family as a young child. Her writing reflects an engagement with contemporary art and critical movements, alongside a connection to neighbourhood and locality. Like many of her generation, she spent much of her young adulthood in motion, and lived on the Gulf Islands for significant stretches before settling into her adopted community in Vancouver's Downtown Eastside.

A longtime fixture of Vancouver's poetry scene, Maxine credits the Kootenay School of Writing with introducing her to many of the writers who influenced her during the period between the publication of Lost Language (1982) and Backup to Babylon (2006). In adddition to her three full–length books, Gadd has published numerous chapbooks, including Westerns with Air Press, hochelaga with bill bisset's blewointment press, and Fire in the Cove with mother tongue Press. An excerpt from 'Maxine Meets Proteus in Gastown,' from Backup to Babylon was featured on Vancouver buses as part of the Poetry in Transit project in 2007.