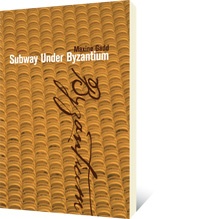 About Subway Under Byzantium

First there was Backup to Babylon. Now comes Subway Under Byzantium, the second in Maxine Gadd's double act of works about the Gulf Islands and the Downtown Eastside: twin axes of the fall. Covering the period from 1986 to 1993, Gadd's writing in this volume is by turns intensely personal, slyly funny, and socially incisive. Her poetry draws on the people she knows and the sights she sees on the street. At the same time it invokes myth, formative texts, and magical incantations.

As Maxine Gadd herself describes the book, "Five sets of apocalyptic poems from the end of the twentieth century, demonic particulars in the angel of air: 'Loon', 'Lac Lake', 'Boatload to Atlantis', 'Styx' and 'Subway Under Byzantium.'" Subway Under Byzantium is a welcome opportunity for readers to immerse themselves in Gadd's intensely human poetry.

Maxine Gadd lives in Vancouver's Downtown Eastside. She is the author of Lost Language (1982) and Backup to Babylon (2006), finalist for the Dorothy Livesay Poetry Prize.