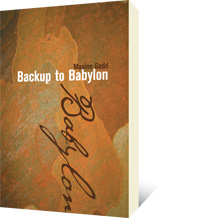 About Backup to Babylon

Backup to Babylon collects three shorter works by Maxine Gadd, a writer who has based her life and her work in Vancouver's Downtown Eastside for more than two decades.

The first section, "Greenstone", follows an arc between rural life, shaped by idealism, and the city. Feminism, activism, and utopianism are among Gadd's concerns.

"Backup to Babylon" describes the Vancouver of the 1980s, a time of the Francis Street Squat, of Solidarity, of political hope raised up and crushed. "Lac Lake" describes a world made from the pieces left by the collision of cultures called "contact"

Versions of "Greenstone", "Backup to Babylon", and "Lac Lake" were privately published in limited editions. With their publication in book form, they are now made available for the first time to a broader readership.

Maxine Gadd is a long–time resident of Vancouver's Downtown Eastside. Backup to Babylon is her first book since Lost Language appeared in 1982.