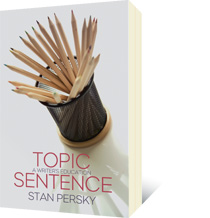 From the Introduction by Brian Fawcett

"A first clue to how this book is going to work lies in the book's title: Topic Sentence. In the title story, written in 1970, Persky took on the two questions that dog every artist in the post–modern: What is the subject matter, and how can it be articulated? Since both questions are unanswerable, Persky twists them: How am I supposed to isolate the subject matter from the myriad of things in which it is lodged, and how do I elude the distortions of conventional exposition and its self–serving selectivity? How do I make what I write as alive and dynamic as the things I write about?

"...The book has three slightly cryptically–named sections: Before, During, and After. They do not mean beginning, middle and end. Instead, they mark, without having discrete boundaries, the three stages Persky has traversed to become a writer: self–articulation, ideology and dissidence; sexuality; and the still–in–progress open field that lies beyond commissioned intentions and self. Persky began as a poet, morphed into a fine political writer, then wrote about homosexuality, and now is a writer prepared to examine every and anything with a fully deployed sensibility that includes his political and sexual commitments and passions without being governed or limited by either or by anything else. The problem with this sort of explanation is that it makes it appear to be linear, and that's not how Stan Persky's mind—or this book—operates."

Stan Persky is the author of more than a dozen books, including the BC Book Prize-winning The Short Version. He divides his time between Vancouver and Berlin.