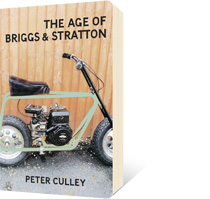 The Age of Briggs & Stratton

About The Age of Briggs & Stratton

The world's largest manufacturer of the two–stroke engine may seem like an unusual jumping–off point for poetry. But Peter Culley's second book about his hometown Nanaimo stems from his realization that there is not an hour of his waking existence when he cannot somewhere hear a leaf blower, a lawn mower or another piece of Briggs & Stratton–powered machinery.

This book was written in a little over a year—a year which saw droughts in Tofino, floods on the Gulf Coast & Canadian boots on the ground in the never–ending "war on terror". Meanwhile, Hammertown—Culley's half–imagined version of the place where he lives—is being ripped apart by corporate boondoggles, accelerating development and the triumph of the service economy. In Culley's bitterly lyrical poems elements of this disappearing world appear as bad jokes, snatches of song and passages of reminiscence. Old records and half–remembered films are arrayed against impending collapse. Like small and noisy engines themselves, Culley's poems address the impossible contradictions of our unnamed era.

Peter Culley is the author of The Climax Forest and Hammertown. He lives in South Wellington, British Columbia.