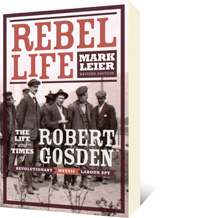 Extensively revised throughout and including a chapter of new material, Rebel Life chronicles the life of labour organizer, revolutionary, anarchist and labour spy Robert Gosden. Mark Leier's revisions incorporate new information about Gosden's career that has come to light since the first edition was published in 1999.

Canada's west coast was rife with upheaval in the second and third decades of the twentieth century. At the centre of the turmoil is Robert Gosden, migrant labourer turned radical activist turned police spy. In 1913, he publicly recommends assassinating Premier Richard McBride to resolve the miners' strike. By 1919, he is urging Prime Minister Robert Borden to "disappear" key labour radicals to quelch rising discontent. What happened?

Rebel Life plumbs the enigma that was Gosden, but it is much more: an introduction to BC labour history: a trove of rarely seen archival photograph, and sidebars rich with historical arcana; and, with its chapter describing the research that unearthed Gosden's story, Rebel Life is a rich resource for instructors, students, and trade unionists alike.

Born in Ladner, BC, Mark Leier worked at several jobs, including dishwasher, bridge tender, printer, construction labourer, truck driver, cook, and busker before going to university. He received his PhD from Memorial University of Newfoundland and is currently in the History Department at Simon Fraser University. In addition to Rebel Life, he is the author of Bakunin: The Creative Passion (1996); Red Flags and Red Tape: The Making of a Labour Bureaucracy (1995); Where the Fraser River Flows: The IWW in BC (1990); and with M.C. Warrior, The Light at the End of the Tunnel: A History of the Tunnel and Rockworkers Union (1992). A regular media commentator on labour, left, and Canadian history, his work has appeared in daily newspapers as well as academic journals.