Books → Non-Fiction → Voyage Through the Past Century 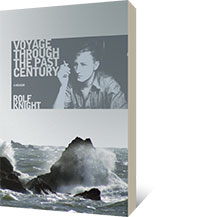 Voyage Through the Past Century

About Voyage Through the Past Century

Though unaffiliated with any institute of higher learning, Rolf Knight has established himself as a writer of significance, and has produced some of the most influential works of history of British Columbia.

A Very Ordinary Life, exploring his mother's life as a working–class immigrant to Vancouver, established his reputation in 1974. Indians at Work, published in 1976 and reissued in 1996, was originally highly contentious but has since shaped the perception of "contact" in this part of the world as no other book has.

Throughout the 1970s, Knight continued to document working–class experiences in British Columbia through a series of books: A Man of our Times (with Maya Koizumi); Stump Ranch Chronicles; Work Camps and Company Towns; and Along the No. 20 Line (reissued, 2011). In 1992, he published Homer Stevens: A Life in Fishing (with Homer Stevens), and was also awarded a Clio prize by the Canadian Historical Association for his contributions to regional history.

In Voyage Through the Past Century, we have Knight's autobiographical account of his far–from–ordinary past: A journey from his early years as the only child at Musketeer Mine, through his move to northeast Vancouver where he attended school and entered university. Earning a PhD in anthropology and subsequent fieldwork in Northern Quebec constitute his formal schooling, but it was Knight's travels––upcoast as a youth, trips to Berlin, Nigeria, New York and Colombia––that shaped his politics and views.

Clear–eyed and written with the verve and passion of a working–class activist, Voyage Through the Past Century is an engaging record of a fascinating life, and an indispensable account of a time and place that has marked our age, even as the events that shaped it fade into the past.

Rolf Knight (1936-2019) was born and grew up in Vancouver and in the resource workers' camps of the British Columbia coast, where he worked until the late 1950s.

After earning a BA and MA from the University of British Columbia, he travelled for some years before getting his PhD from Columbia University in New York in 1968. He returned to Canada and taught at the University of Manitoba, Simon Fraser University, and the University of Toronto, until leaving academia for good in 1977, supporting his writing as a labourer, driving taxi and handling baggage at the Vancouver International Airport.