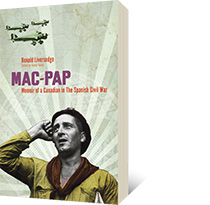 Mac-Pap: Memoir of a Canadian in the Spanish Civil War

Ron Liversedge could hardly wait for the call from the International Brigades. A veteran of the Great War, Canada's Great Depression, and scores of battles for social justice, he wanted to get to Spain to fight against Franco's attack on the young Spanish republic. It was the spring of 1937; Liversedge was nearly 40.

The call came on May Day. Liversedge left Vancouver, on a clandestine journey through late depression North America, to a ship spiriting his fellow fighters to Europe, to an immediate brush with death when he is torpedoed by a fascist submarine, to rudimentary training of the international volunteers in Spain.

Ill prepared and ill equipped, Liversedge and his comrades in the Mackenzie–Papineau battalion are thrown into withering front line action at Fuentes de Ebro and a grinding succession of battles, steadily beaten back by the fascist onslaught, to the final exodus from Barcelona.

Liversedge's memoir of those two years, written in the 1960's, is a riveting, soldier's–eye account of life and death at the front, of the fascinating panoply of characters drawn to the Spanish struggle, of the ravages of the war on Spain and its people, and of the reasons that drove thousands of Canadians to volunteer.

After almost half a century, Ronald Liversedge's illuminating account, richly annotated and illustrated, appears for the first time.

Ronald Liversedge, born 1899 in Bradford, England, twice wounded in WWI, emigrated to Canada in 1927. Already a committed Communist, he immediately took part in the resistance to unemployment and the relief camps. After Spain he lived most of his life working as a logger on Vancouver Island. He died in 1974.

Ronald LIversedge is the author of Recollections of the On–To–Ottawa Trek (Macmillan, 1974), the classic account of that watershed event in Canada's social history. Mac–Pap has been edited and annotated by retired BC labour lawyer David Yorke.

David Yorke was born in 1945. A fourth generation Vancouverite; schooled in Vancouver and North Vancouver; growing up in a left–wing family, he knew and worked with a number of Mac–Paps. He earned a degree in Canadian History from SFU in 1970 and finished Legal Training at UBC in 1975. His 30 year legal career has involved representing unions, and in particular the BC Teachers' Federation for which he was staff counsel for twenty years. In retirement David continues to have an interest in labour and left wing history and is currently a Director of the On–To–Ottawa Historical Society and active in labour history projects. He lives with his wife Pat Sexsmith in Burnaby.