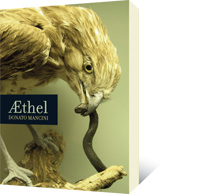 Fascinated by the ligature –– a joining of two letters in a single word –– Donato Mancini chose, logically, to conjure one up in the title of his second book of concrete poetry, Æthel. "Although," as Mancini remarks parenthetically, "it might be the name of the crabby old blue–rinse who calls the police if you cross her lawn."

Æthel, the book, is anything but crabby. Mancini's further iteration of the titular character, now in medieval guise, as "the kind of person who might've razed your village or died as King while still a pup" gives some indication of his poetry's sense of humour. Riffing off the dual meaning of the word, Mancini lastly calls Æthel "a book full of well–developed characters... which has so much character."

The titles accompanying Mancini's exquisite, creative arrangements of recognizable fonts are more than half the fun. The fonts he chooses –– the hands that form the alphabet of sign language, the fat, stubby bulbs of Creampuff –– are another source of pleasure. But it's the shapes the author and artist fashion out of these elements that, in the end, have a strange and enduring beauty.

Donato Mancini is the Author of LIGATURES. He lives in Vancouver.