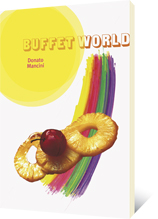 Visually and conceptually dynamic, Buffet World is Donato Mancini's collection of poems about food, trade and life under late–late–night–snack capitalism.

Exploring the relationships between industrial food production, eating, culture and the politics of language, Mancini organises his controlled palette of words and images around metaphors of consumption and the formal device of the list. The numbers and statistics that fill the book stand as a critique of the grotesquely inhumane scales of capitalist production today – in–kind retort to the brutality of economic–fundamentalist abstractions that increasingly determine policy and regulate inner lives.

Incisive humour permeates Buffet World. The poems capture Mancini's diamond wit, as well as his dissatisfaction with the conditions of a world built on so many systemic cruelties. Buffet World underlines our inescapable complicity as (constantly) both victims and victimisers in a system that should leave us choked with rage, but more often dazzles us with a surreal spectacle of false hope.

The images in Buffet World are colourful and almost garish. The words are, in true Mancini fashion, brilliantly manipulated. Equally concerned with the violence done to our planet, our bodies and imaginations, these poems perform a deep critique, but remain accessible and fun to read.

The interdisciplinary practice of Donato Mancini focuses mainly on poetry, bookworks, text–based visual art and cultural criticism. His two New Star books of procedural and visual writing, Ligatures (2005) and Æthel (2007) were each nominated for the ReLit Award, while Ligatures received honourable mention in the Alcuin Book design awards. He is currently enrolled in the PhD program at the University of British Columbia in Vancouver.