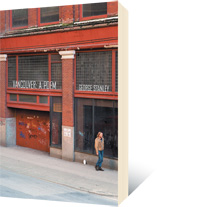 About Vancouver: A Poem

The Lions bare of snow, crowded express buses, a giant red turning letter W. Vancouver: A Poem is George Stanley's vision of the city where he lives, though he does not call it his own. Vancouver, the city, becomes Stanley's palimpsest: an overwritten manuscript on which the words of others are still faintly visible. Here the Food Floor's canned exotica, here the stores of Chinatown, here the Cobalt Hotel brimful of cheap beer and indifferent women.The poet travels through the urban landscape on foot and by public transit, observing the multifarious life around him, noting the at times abrupt changes in the built environment, and vestiges of its brief history. As he records his perceptions, the city enters his consciousness in unforeseen ways, imposing its categories and language. Skirting chestnuts on the sidewalk or reading William Carlos Williams's "Paterson" on the Granville Bridge, the poet travels along the inlet, past the mountains, under the trees, interrogating the local world with his words.

George Stanley, the author of five books of poetry including A Tall, Serious Girl, At Andy's and Gentle Northern Summer, was the 2006 recipient of the Shelley Memorial Award from the Poetry Society of America. He lives in Vancouver.