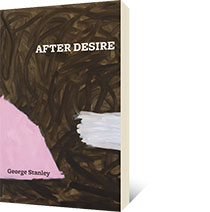 "Don't gaze into the abyss," George Stanley states in his new book. "Gaze out."


And this is what the reader receives from Stanley's eighth book, After Desire: the observations of a poet, and a consciousness, as they arrive together at old age. Not what the poet is thinking — although we get to watch him thinking too — but what he sees and notices; what he is thinking about.

This might be the different effect that Beauty has on him, after desire has fled, "stripped of even the desire for desire." This might be a contemplation of what it is that an infant contemplates when it gazes upon an old man, like the poet. It might involve snatches of the conversation between the poet and the ghosts that haunt this work: Jack Spicer, Robert Duncan, Anna Akhmatova.

Like all of George Stanley's work, the poems in After Desire tend to take as their point of departure some aspect of Stanley's everyday life. The poem might be sparked by the beauty of a waiter in one of the restaurants in Stanley's Kitsilano neighbourhood, by a conversation in his neighbourhood pub, by a glance exchanged with a baby or a teenager on the bus, by a failing vacuum cleaner, or by the reading of another poet's poem. Whichever the case may be, Stanley's own poems remain solidly embedded in the material city in which he lives.

After Desire includes three poems originally written in 1971, and lost for forty years.

Born in San Francisco, poet George Stanley has been living in BC since the early 1970s, first in Vancouver, then in Terrace and then back in Vancouver.

A former instructor in the English department at Capilano College, he has published seven books, including Vancouver: A Poem, At Andy's, Gentle Northern Summer, Opening Day, The Stick, and You. He is the recipient of the 2006 Shelley Memorial Award for Poetry.