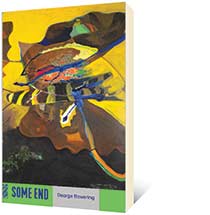 About Some End / West Broadway

A masterpiece of late style and friendship, this volume combines back to back two powerful new works by old masters, George Bowering and George Stanley.

Stanley's West Broadway is a long poem, composed over the past decade, following on Stanley's other long city poems, "San Francisco's Gone," "Terrace Landscapes," and Vancouver: A Poem. Like those poems, West Broadway has embedded in it shorter verse poems that stand on their own.

"West Broadway is a narrative/lyrical work, set along the West Broadway corridor on the West Side of Vancouver. It's a sequence of events, personally experienced but largely uninterpreted, that may take place crossing the street or on the sidewalk, riding the bus, in interiors, or in dreams. Along the way there are versions of poems by Charles Baudelaire and Anna Akhmatova." — George Stanley

Bowering's Some End is a suite of thirty-two poems tracking his recovery from a near fatal cardiac arrest in 2015. Throughout, Bowering's wit, his command of the idiom, and his ironic self-awareness shine through as powerfully as ever.

"I just loved, and still do, the notion of doing a flip book with George Stanley, and took to the idea even before we started trying to enter each other's poems, as we do in this book. Some End continues, in its short length, the formal organization I have been listening to over the past few years and in my recent volumes. I can't say much about the images and arguments of the poems, because i just start going on one and keep going till it shows me when to quit. I thought at first that I was deriving from my late-in-life admiration of John Ashbery, but I wouldn't be surprised if you said sounds more like the procedural thought in George Stanley's recent work. When an old guy such as I says "recent," he does not mean just a year or so." — George Bowering

George Bowering is a two-time winner of the Governor-General's Award for Poetry, and was Canada's first Poet-Laureate. His most recent books of poetry are The World, I Guess (2015) and Teeth (2013). New Star Books recently re-issued his 1977 novel A Short Sad Book.

George Stanley is the author of seven previous books, the most recent being After Desire (2013), Vancouver: A Poem (2008), and North of California St. (2014), which collects poems from three earlier, out-of-print books. Born in San Francisco and living in Canada since 1970, Stanley was the 2006 recipient of the Shelley Memorial Award from the American Poetry Society.