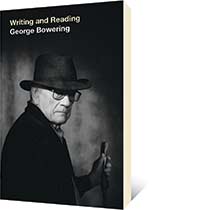 About Writing and Reading

In the course of a writing life that has spanned more than five decades and encompasses almost eighty books of fiction, poetry, history, and criticism he's written and another thirty that he's played an editorial role in, George Bowering has learned a thing or two about the craft.

Running through Writing and Reading is the theme of reading — and paying attention — and its centrality to any writing practice.

Born in 1935 and raised in the southern Okanagan town of Oliver, BC, George Bowering has won the Governor-General's Award for both Poetry (in 1969, for Rocky Mountain Foot) and Fiction (in 1980, for Burning Water).

George Bowering was Canada's first Parliamentary Poet-Laureate, and is a member of the Order of Canada as well as the Order of British Columbia. His most recent books include No One (fiction, 2018), Ten Women (short stories, 2015), The World, I Guess (poetry, 2015), and, with George Stanley, Some End / West Broadway (poetry, 2018).