Books → Non-Fiction → The News We Deserve 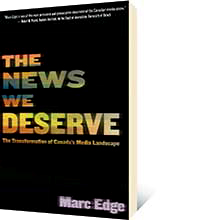 The News We Deserve: The Transformation of Canada's Media Landscape

About The News We Deserve

The News We Deserve: The Transformation of Canada's Media Landscape documents the most under-reported story in Canadian news: the behind-the-scenes takeovers, mergers, share swaps, regulatory maneuvers, and private ambitions that have reshaped the content and business models of today's print and online newspapers to privilege corporate profits and political influence over the goal of informing citizens.

A generation of laissez-faire government attitudes towards media ownership smoothed the way for the stealthy transformation of Canada's mainstream press from its old ideal as fearless expositor of truth, as epitomized by Woodward and Bernstein, to a partisan, activist press that openly advocates certain outcomes.

A driving force behind these incremental but radical changes has been share ownership and the influence of financial markets. While in the USA the tendency has been a focus on business and consumers' wallets, in Canada the media's new owners have strived for political power and influence. The new owners' reach extends from the anchors reading the day's soundbites and the front pages of the shrinking-but-still-influential newspapers to the schools forging the next generation of journalists.