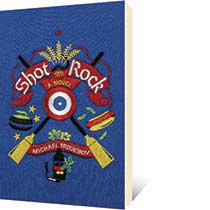 When the smell of October's raked leaves gives way to that of morning frost, a mature Winnipeg man's fancy turns to thoughts of curling.

But this fall Blackie Timmerman has been hogging stones off the ice. His wife of twenty years Deirdre has left him; his precocious son Tino has moved out of the house and into political radicality, mentored by a relentlessly principled Michael MacGiligary, scion of the Winnipeg establishment. The two share a devotion to curling and revolutionary socialism, as well as a friendship whose closeness and secretiveness alarm Blackie on every level.

And now, his north-end Jewish curling rink, the Queen Victoria, Winnipeg's friendliest club, and most dilapidated, is going to be sold and the club disbanded come spring — if the Executive, led by Max Foxman and his clique of nouveaux riches, gets their way.

The 1970s will be cruel to Blackie, who had expected they would be the gravy on the veal cutlet of an honest modest life. Spurred on by Michael, the only non-Jewish curler at the Queen Victoria, and Tino, both of whom are impatient to make a big political histoire — combatting injustice and alienation — Blackie and his curling team, Suddy and Duddy, Oz, and their kibitzer Chickie, decide to take on Max Foxman and the South Enders to deliver the club from the fate of becoming a supermarket, and their having to curl on alien ice in the South End.

It's class war on and off the rink, where all is fair, even Duddy's attempt to seduce Max Foxman's wife Sophie, the girl Max Foxman had stolen from Blackie while our hero was part of the Canadian army invading Sicily in WWII. When not distracted by the nostalgia of lost love and gallantry, Blackie believes that curling finesse and canvassing can swing enough club members to vote down Max Foxman, so that for once the North End guys will sit shot rock.

"Michael Tregebov has an ear for clever, fast-paced dialogue. Other reviewers have compared him favourably with Mordecai Richler and the colourfulness of his characters would strike any Richler fan as being motivated by the same sense of adoration for a Winnipeg of a certain era that Richler had for his early years growing up in Montreal . . . I read this 220-page book quite quickly because I could relate to so much of the plot — and that I was drawn into the vivid manner in which it brought back to life a period in my own growing up here that I had largely forgotten. I'm sure it will do the same for many of the readers of this paper . . . Tregebov has captured so many of the sights and sounds of a bygone era that it is bound to bring a smile to the face of even to the most jaded of Winnipeggers."
— Bernie Bellan, Jewish Post & News

"Michael Tregebov captures the flavour of an era as North-End Jewish curlers take on the nouveaux riches from the South End in a shareholders' battle to save Winnipeg's only Jewish curling club . . . The club is fictitious, but Tregebov's third book, Shot Rock, is loaded with other Winnipeg landmarks; you don't have to know them to enjoy the story, but if you do, the narrative becomes far more personal."
— Gordon Arnold, Winnipeg Free Press

Michael Tregebov was born in 1954 in Winnipeg, Manitoba. He graduated from the University of Manitoba with a BA in English. His first book of poems, Changehouse, was published by Turnstone Press in Winnipeg in 1976. That same year he began an MFA in Creative Writing at the University of British Columbia.

He received his MFA in Creative Writing in spring 1978, immediately after which he moved to Barcelona, where he learned Spanish and, accidentally, Catalan. He returned to Vancouver in 1979 and began a Masters in English at Simon Fraser University. After dropping out of SFU he returned to Barcelona in the fall of 1981, where he has made his home ever since.

In addition to teaching English and Spanish translation and 19th and 20th century American literature at the American Institute of Barcelona (Institut d'Estudis Nordamericans) from 1984-88; and at the neo-liberal Jesuit-run ESADE from 1989 until his retirement in 2005. During that time and until the present he has translated and dubbed Spanish travel programs and industrial American TV shows, including a hundred episodes of Star Trek (both generations) and The Equalizer into Catalan and Spanish, a million-plus words in corporate, tax and labour law and another million in chartered accountancy for PriceWaterhouseCoopers Spain, the capitalist police, as well as a book of essays (Escribir y ser) by Nadine Gordimer, and translations in areas stretching from art history to perfume.

In 2009, his novel The Briss was short-listed for the Commonwealth Writers Prize (first novel category) and optioned for film. The Briss was followed by The Shiva in 2012. In 2015 Penguin Random House Lumen published his translation of, and prologue to, William Carlos Williams's KORA IN HELL in their best-selling William Carlos Williams POESíA REUNIDA, chosen by El País as one of the best books released in Spain and Latin America in 2015. Shot Rock is his third novel.

Michael Tregebov lives with Virginia, his wife of 39 years, in El Masnou, a Catalan coastal town just north of Barcelona.