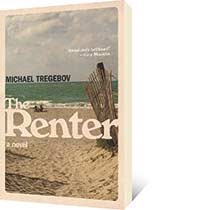 The Renter, Michael Tregebov's fourth novel, is set in Winnipeg Beach, Manitoba's version of cottage country, ca. 1968. Once the preserve of the city's establishment, by the time the events of the novel take place, Winnipeg Beach has declined to the point that even the city's middle classes, including its prosperous Jewish citizens, could afford addresses there.

Michael Tregebov's would-be hero in The Renter is a young man sporting a summer tan, Keds and crisp short-sleeved white shirts, and toting a transistor radio. Bret Yeatman is out to recoup the social position his father lost through financial ruin, and is determined to realize his fantasy by marrying up and into the well-to-do family of his first perfect love, Sandra Sugarman, and renouncing his easy, promiscuous life in the drug trade. But his fantasy collides with Sandra's own — stars are crossed, and the fates will have their day.

The Renter is the latest installment in Michael Tregebov's comédie humaine Winnipeg-style, which also includes Shot Rock (2019), The Shiva (2012), and The Briss (2009). A literary translator, Michael Tregebov was born and raised in Winnipeg but now lives near Barcelona in Spain, his home since the 1980s.

Born in Winnipeg in 1954, Michael Tregebov obtained his BA in English from the University of Manitoba and his MFA in Creative Writing from the University of British Columbia. His book of poems, Changehouse, was published in 1976 by Turnstone Press. He later studied in the Master's Program at Simon Fraser University, before moving to Spain in 1982.

From 1983 to 1989, he taught American Literature and Translation at the American Institute in Barcelona, and from 1989 to 2005, English at Escuela Superior de Administraci&#243;n y Direcci&#243;n de Empresas, also in Barcelona.

Tregebov's first novel, The Briss (2008), was a finalist for the Commonwealth First Novel Prize (Canada-Caribbean Region). The Shiva was published in the summer of 2012. His most recent novel is Shot Rock (2019).